All About Eyes – Danville

At All About Eyes, our licensed optometrists provide more services than a typical retail eye clinic at an affordable price. Our Danville practice is conveniently located on N Vermilion St in the strip mall in front of Meijer and across from Lowe’s.

Call 217-213-6264 to schedule an appointment or use the button below to set up an exam with our convenient online scheduler. 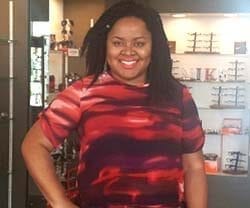 Utang Ekpo was raised in Lawrenceville, GA and received her doctor of optometry degree by the Illinois College of Optometry, in May 2015. The graduate originally hails from AkwaIbom State, Nigeria but lived in Gwinnett County, GA from a young age. She completed a Post-Doctoral Residency in Ocular disease and Primary care under the Veterans Healthcare System of the Ozarks at Gene Taylor OutPatient Clinic in Mount Vernon, MO on June 2016. Her case report on Wolf-Hirschhorn Syndrome co-written with Dr. Maino of ICO was accepted as a poster for the College of Optometrists in Vision Development (COVD) annual meeting, April 2015. The graduate says, “My experience at ICO and residency has provided me with the comprehensive clinical skills and expertise to practice at All About Eyes.” She is currently an active member of the Academy of American Optometry, American Optometric Association, the Illinois Optometric Association, and the National Optometric Association with the goal of of furthering optometry as a profession.

Our eye examinations and contact and glasses fittings will ensure you can see clearly. And when you come to our clinic, you can select the eye wear option you need from choices such as:

If you need new eyeglasses, you can choose from many different brands and styles. Whether you’re a 16-year-old girl or an 80-year-old man, you’ll find a pair of frames you’ll love at our clinic. Plus, experienced technicians craft your lenses in our advanced optical lab.

We accept most insurance plans. We also offer employers our own affordable vision plan to help people save money on our services.

We always appreciate your candid feedback.