See Into the Past: the Fascinating History of Eyeglasses 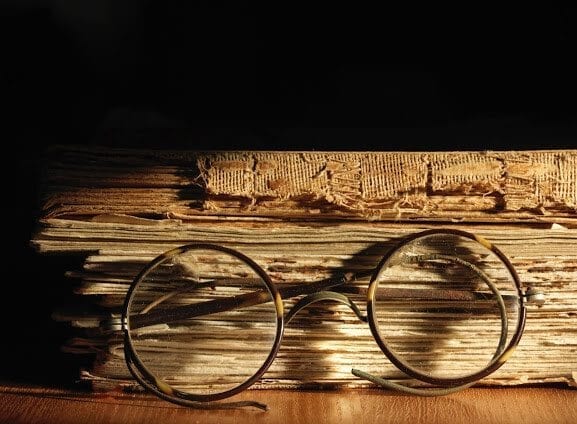 Seeing someone wearing eyeglasses today is just as common as seeing a person wearing a scarf during the winter time. Glasses are a tool that provides vision to most people, regardless of prescription or eye shape. But it wasn’t always this way.

The development of glasses as a common treatment for imperfect eyesight took centuries, with many brilliant innovators paving the path to the perfect vision you get to enjoy today. Have you ever wondered about the primary technology behind spectacles? Here’s a glance into the history that now allows millions of people to read, drive, perform surgery, and accurately shoot a gun.

The first inventor of wearable glasses is unknown. However, the Romans first discovered the ability to use to glass to enhance their ability to see small text, creating small magnifying glasses with spheres.

The first wearable glasses known to history appeared in Italy during the 13th century. Primitive glass-blown lenses were set into wooden or leather frames (or occasionally, frames made from animal horn) and then held before the face or perched on the nose. Mostly used by monks, these grew in popularity and the technology improved through the Renaissance.

Glass blowers would make lenses of different thickness based on rudimentary vision testing. As these glasses became more popular, the Italian creations spread throughout Europe, mostly available to the wealthy. Because scholarship was a prized attribute during the Renaissance, glasses were status symbols of intelligence and prosperity.

The technology might have remained stagnant for several centuries, because the next clear historical picture of spectacles comes during the 1700s. Glasses grew to be “hands free” with the development of temples to extend over the ears.

Perhaps the most famous of these more modern glasses include “Martin’s Margins,” spectacles developed by the inventor Benjamin Martin. These glasses are sold as collector’s items today, but they pioneered the pursuit for more accurate lens development and thinner lenses supported by durable frames.

After the “over the ear” innovation, new developments with glasses began to speed up. Benjamin Franklin added to the versatility of glasses by inventing the bifocal lens, which allowed a person with both near and far-sighted affectation to use one pair of glasses instead of two. He did this at first by cutting lenses in half and putting them together into one frame.

Another style that was prominent during this time was “scissor spectacles.” These were glasses that could be stored in the pocket and taken out when needed for seeing something important. Some men did not enjoy wearing glasses full time, so these were the answer: pocket glasses that could be folded up on a hinge like a pair of scissors.

As the 19th century dawned, glasses were still handcrafted and not available to everyone. But the industrial revolution was right around the corner, and mass production of both frames and lenses made it much simpler for working men and women to obtain the necessary eye correction.

With lens technology and accurate prescriptions becoming ever more affordable during the 1800s, the 1900s saw a trend toward making glasses fashionable and stylish. Frames with different  shapes, materials, and colors became available for those who wanted glasses to match their face shape, eye color, or outfit.

For example, Theodore Roosevelt wore pince-nez spectacles, which had no earpieces, but instead stayed in place with a nose clip. These glass were quite popular earlier in the century, but fell out of fashion as they became associated with older generations.

Most notably, styles changed because of the availability and development of strong plastics. No longer did all glasses need to be made with wood, metal, or horn frames. Plastics could be molded into many shapes and sizes.

The 20th century also saw the rise of sunglasses. While sunglasses were first innovated in China during the 12th century, they were not for vision or for protection from the sun. Instead, they were used to obscure the eyes of judges in court so no one could determine their expressions.

Other glasses manufacturers experimented with colored lenses, but these again were not for protection. Only in the 1900s did tinted sunglasses begin to be used for light sensitivity caused by medical conditions. The fad spread beyond medical application, and starting in 1929, sunglasses were mass produced for sun protection and reducing glare.

Finally, the 1980s saw the introduction of plastic lenses. These were less breakable, and they could be made lighter and thinner than their glass predecessors. Modern technology continues to improve glasses with protective coatings that reduce glare and UV light.

Your glasses are the result of centuries of innovative technology. For more information on finding the right glasses for you, contact us at All About Eyes.